Back to all posts

I am so sad to hear of the death of Pete Zorn, one of the finest musicians playing on the folk circuit. He played for many years with Barbara Dickson, Richard Thompson and latterly Steeleye Span as well of course as other combinations and bands. I had the enormous privilege of working with Pete when he played on my two albums and subsequently played with the band live when we did the album launch gig in September 2010. He was an extremely talented and versatile musician, playing sax (3 types), flute, piccolo, mandolin, guitar, bass and occasional percussion as far as I know. In the short time I spent with him, I learnt a massive amount. Play on Pete through eternity. You can hear Pete's brilliant sax playing on the Store page: listen to Your Aching Heart from the Never Look Back album and Crystals of Ice from the Mean Little River album. There is also a beautiful bit of sax at the end of the Mean Little River track on the same album. 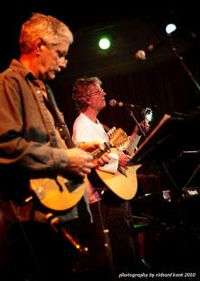 Pete playing mandolin at the album launch gig in September 2010